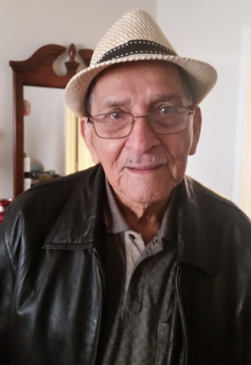 Alfredo Ramirez, 99, was released from his suffering on June 21st, 2020 at Seven Acres Senior Care Services. Alfredo was born February 5, 1921 in Iquitos, Peru. He is survived by his children, Soledad and Alfredo Ramirez; his grandchildren, Jeffrey, Jesse, Kelly, Laura, Paul, and Roberto; his great-grandchildren; Lilou and Logan, and many other family members and friends that loved him.

Alfredo, “Abuelo”, or “Abuelito” as he was affectionately called, was a perfectionist; never leaving the house without his shirt tucked in, a sweater or a vest and his ever present hat. He will always be   remembered for his impeccable style, his love of Criolla music, and how he prided himself in the fact that he had carried each of his grandchildren in his arms.