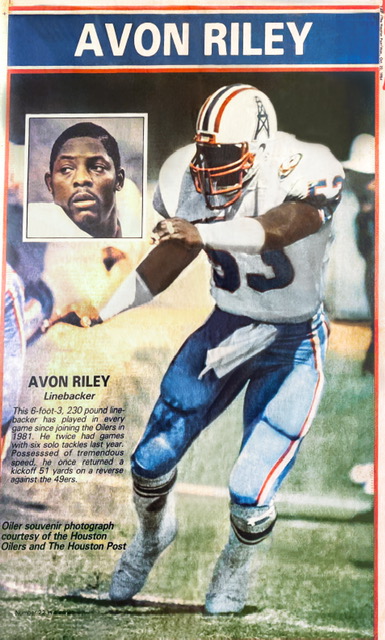 A Man of Integrity

If you ever met Avon, you would never forget him.  He was a big man with an evenbigger heart and always greeted you with a big smile.  He was articulate, carried himself with dignity and treated everyone with kindness.

He gave his life to Christ at a very young age and was educated in the Chatham County Public School System in Savannah, Georgia.  Avon was a Class of 1977 graduate of Savannah High School.  He was a well-rounded athlete and triumphed in football, basketball, and track & field.  His passion for football and commitment to the game led him to excel at the College of the Canyon and UCLA, where he was later inducted into the COC Hall of Fame.

In 1981, Avon got the phone call of a lifetime and was drafted into the National Football League (NFL) by the Houston Oilers. He went on to play professionally for 7 years.

He was joined in Holy Matrimony to Ms. Kim Brown, and to this union was born a daughter Avion Riley Frazier (Steven), and a son Avon Riley, II.

While in Houston, Avon was employed by Houston’s Independent School District for 25 years, where he mentored young men and women to overcome obstacles, seek fulfillment and achieve their goals.

Those who were fortunate enough to know him affectionately referred to him as “Big Man”.  Avon was always concerned about young people and was a vigorous supporter of youth athletics and education in Savannah, Georgia and Houston, Texas.

The fullness of Avon’s life demonstrates that anything is possible with Godly faith and hard work. While sudden and unexpected, Avon answered the Master when He called.